The Season of Early Renaissance of Giorgio di Matteo

Nothing like the stone heritage of Giorgio di Matteo, can evoke the glory of the small Maritime Republic of Ancona.
This itinerary is articulated through the Via della Loggia, Via Pizzecolli and the initial stretch of Via Cialdini (originally known as Via Pubblica, Via Maestra and Strada Grande di Capodimonte), hubs of social and economic life of the ancient town.
Giorgio di Matteo, architect, urban planner and sculptor, also called Giorgio Orsini da Sebenico (Juraj Dalmatinac Matejev - Zadar 1410-1475), was one of the main exponents of the artistic season developed between Dalmatia, Venice and Ancona, called "Adriatic's Renaissance."
Its unique activities is characterized by the mixture of styles, in which the plasticity of the flamboyant Gothic style, looks and blends harmoniously with the return to the classic, typical of the early Renaissance art.
The career of Giorgio di Matteo begins in 1430 on Venice, collaborating at the workshop of Giovanni e Bartolomeo Bon to the factory of “Porta della Carta” at Doge's Palace.
During the Italian stay, the architect comes into contact with some of the leading exponents of the Florentine Renaissance; these influences are then found in his masterpiece, the Cathedral of Sibenik (UNESCO heritage since 2000), to which he worked as a "protomagister."
Orsini arrive at Ancona in 1400, the golden age in which the republic has reached its greatest extent (315 km²).
Among the main commercial activities of the city there are the ship yards and the navigation, here we place the figure of ship owner Dionisio Benincasa, who commissioned at the Dalmatian architect, the factory of his palace.
Palazzo Benincasa: 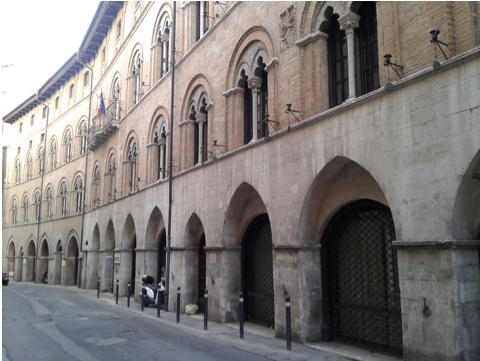 One of the largest private buildings in Ancona, is located in the ancient and tortuous "Via Pubblica" today called Via della Loggia.
The building extends for 50 meters, following the curvilinear trend of the road, is the first in chronological order, of a series of interventions that the Dalmatian architect worked in Ancona.
The three floors, built of bricks are rhythmically harmonized by a series of trefoil mullioned, which refer at the Venetian Gothic style.
The ground floor is characterized by an ogival loggia, partly built in white stone of the Conero (local limestone similar to Istria stone), and partly in brick, decorated with an elegant zoomorphic theme.
Restored in the eighteenth-century with the addition of the third floor, now it houses inside the elegant halls the "Library Amatori."
Adjacent to the palace, stretched between the medieval urban fabric and the harbour, lies one of the finest public buildings, the Loggia dei Mercanti: 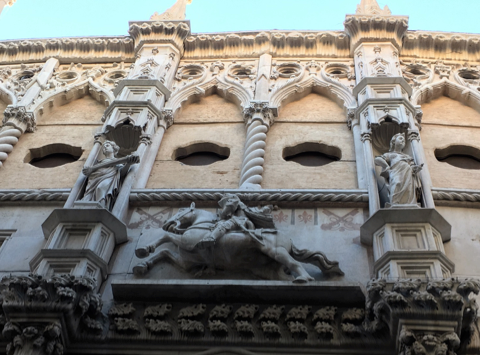 Emblem of the glorious maritime republic and its atavistic commercial vocation, was built in 1442 by the Ancona community charges as evident from the inscription "Sumptibus erectum comunitatis Anconae", and used as a place of trade, and the meetings of the merchants.The work of the rich façade, was entrusted to Giorgio di Matteo who has worked between 1451 and 1459.Considered as one of the emblematic masterpieces of the Adriatic Renaissance, where the flamboyant Gothic style, meets the first expressions of early Renaissance sculpture, creating a mix of huge stylistic value.The ogival loggia on the ground floor, remodeled in the sixteenth century by architect Tibaldi, houses in the central archway, the beautiful wooden portal, attributed to master wood carver Brozzo di Matteo da Firenze.In each column there is a niche containing representations of the four virtues, from left to right: Hope, Courage, Justice and Charity; the four statues take inspiration from the Renaissance models of "Venus Victrix."In the centre pane, it stands the statue of the mysterious knight, herald of Ancona municipalities, whose identity is still unknown.The sumptuous interior is the result of alterations attributed to Pellegrino Tibaldi between 1558 and 1561, following a fire.Of the sixteenth-century decorations of the vault, divided into boxes, remains only a few traces, following the damage of World War II.In the corners stand out the plaster figures in full relief of the "Faith" (the sea side on the left), "Religion" (sea side on the right), "Hope" (left side entrance) and Charity (right side entrance).Taken the Lungomare Vanvitelli, you can see on the right, the ancient church of Santa Maria della Piazza, built in the eleventh century above the ruins of a pre-existing early Christian church whose remains are still visible. Shortly after, through the suggestive staircase called "Volto dei Seniori" we arrive in Piazza Stracca on which stand the eighteenth century church of Gesù, designed by Vanvitelli (architect of the Royal Palace of Caserta) and the Palazzo degli Anziani, founded by the Empress Galla Placidia (425 A.D.).Proceeding southbound, take Via Pizzecolli, formerly known as "Via Maestra," main artery of the old town in ancient time, rich in civil testimonies ranging from the Middle Ages until the eighteenth century. Halfway, it is Piazza San Francesco, characterized by the staircase that leads to the churchyard of the Church of San Francesco alle Scale: 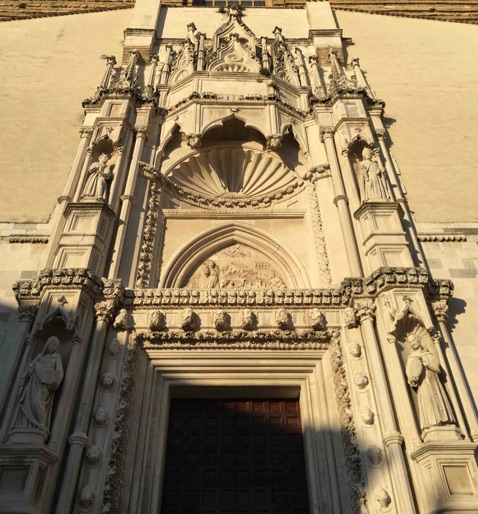 The monumental portal of the church is the third work in order of succession in Ancona, from Giorgio di Matteo, who has worked between 1455 and 1459. Entirely carved in Istrian stone, within two cuspidate pillars with niche who enclose the statues of Saint Claire of Assisi, San Bernardino of Siena, St. Anthony of Padua and St. Louis of Toulouse, and crowned by an half hexagon trefoil canopy, ending with pinnacles of flamboyant Gothic style.The ogival fanlight, it contains the valuable bas-relief depicting San Francesco that receiving the stigmata.But the church of San Francesco, remodeled and converted to different uses over the centuries, is also worth visiting for its splendid altarpiece of Lorenzo Lotto(1550), depicting the Assumption, and the canvas by Andrea Lilli (half of '500), depicting Our Lady of Loreto with Saints Joseph, Anne and Francis (on the top) and Saints Charles, Jerome and James of the Marches (below).Leaving the church, walk along the last stretch of Via Pizzecolli, they pass the Civic Gallery of Modern Art " Francesco Podesti", containing works of great value (Tiziano, Lorenzo Lotto, Crivelli, Guercino etc.). The elegant Gothic-Renaissance courtyard of the Palazzo del Governo, preceded by two Renaissance arches, leads to the spectacular Piazza del Plebiscito (also called Piazza del Papa, to the eighteenth century statue of Pope Clemente XII) and from here you will reach Piazza della Repubblica, where they stand out the nineteenth-century Teatro delle Muse, and the baroque church of SS Sacramento with the bell tower of Borromini's way.After the Church of Sacramento and embarked the climb of Via Cialdini, the tour ends with the Portal of St. Augustine: 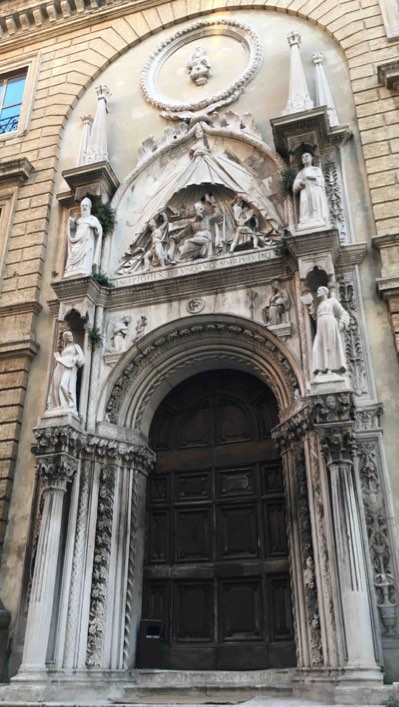 The church dedicated to Santa Maria del Popolo was built by the Augustinians in 1341, where the "Strada Grande di Capodimonte" historical gateway to the city, comes into the downtown.Following the suppression of the monastic orders perpetrated by Napoleon and the secularization in Risorgimento era, the whole complex is used for military purposes.Of the ancient building remains just the marble portal, which the Augustinians commissioned at the Dalmatian architect on June 28, 1460, for a fee of 650 gold ducat.The work is his latest masterpiece in Ancona, due to some disputes with the monks, in 1473, leaves the yard. They will be Michele di Giovanni da Milano and Giovanni Veneziano to complete it following the original plan.The stylistic composition approaches to the Loggia dei Mercanti and models of San Francesco alle Scale, although here it is clear a sort of abandonment of the Gothic style, and a more marked Renaissance influence.As often happens in the artistic production of Orsini, the sculptural section prevails over that architectural and appears set to an Augustinian iconographic pattern.In the niches that adorn the side pillars are placed, the statues of Saint Monica (bottom left) and St. Nicholas of Tolentino (bottom right), while the upper niches are San Simplician (left) and Blessed Agostino Trionfi (right).The round arch molded according to Renaissance style, has a splay decorated with tortile columns, anthropomorphic heads and acanthus leaf motifs, while in the lintel it depicts a scene of the Annunciation.Above, stands the magnificent theatrical composition which sees the sides, two angels lift the veil of ignorance, pulled high by the bust symbolizing Faith, while at the middle, is predominant figure of St. Augustine that rejects heretical books and shows the Holy Scriptures. 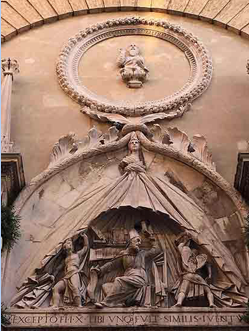 To crown, inside a blind oculus, there is the bust of God "Rector Mundi"  place here after the nineteenth-century restorations.
At the base, near the Corinthian columns, there were two lions in red Verona marble, sculpted in the sixteenth century by Master Peter Bernardino della Scala from Carona then lost.

Where?
Look on the map